Pure Gold can be described as 24 carat. This is depicted on a Gold coin using the term Au 999.9. (Au is the chemical symbol for Gold. Read more about Gold on Wikipedia.)

Sterling Silver is an alloy of Silver and another metal, usually Copper and is depicted as Ag 925, indicating that the Silver is 92.5% Silver. (Ag is the chemical symbol for Silver. Read more about Sterling Silver on Wikipedia.)

Both Gold and Silver coins are 'soft' and damage easily and are therefore housed in plastic capsules. Coins must never be removed from their capsules. 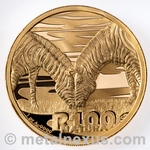 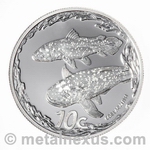 Due to the coins' Legal Tender status it must feature a 'face value' i.e. the amount of money it is 'worth'. These face values are largely for show and should never be used to determine the value of the coin. Low face values such as R 100 or 10c are used.

Once a coin is published it is controlled by law and can therefore not be altered in any way and may not be produced in greater numbers than were initially approved.

South African Coins come in different sizes but are always round. The important factor here is weight. There are four weights, generally measured in Ounces or Grams: One Ounce, Half Ounce, Quarter Ounce and One tenth Ounce. In South Africa, One ounce is equal to 31.107 grams. As previously mentioned, these weights are strictly controlled by South African law. (An Ounce is abbreviated as 'Oz')

The coins form part of several different products such as sets and special editions. Coins are available individually or in sets and are accompanied by a Certificate of Authenticity. The main product types are: 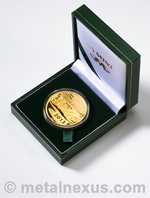 Prestige Set in Wooden box.
The Certificate is very important and will state exactly what the product is and describe in detail the coin or coins included. Weight, diameter, artists, limited edition, purity are a few of the stats that will be displayed on the certificate.
These are the very basics and you can learn more by using the drop down menu under 'information'.
- by Paul B Gibson